For those expecting this to be a post solely about Sofia Vergara’s breasts, big or not, you’re going to be gravely disappointed, just so you know…

We all know the Emmys as sort of the poor man’s Oscars. I mean, it’s television, and not that television can’t be great or isn’t great or wasn’t great, but let’s face it, you’re not seeing a whole lot of George Clooneys (big) and Brad Pitts (biggity-big) on the Emmy red carpet (at least, not any more). That doesn’t mean that we still don’t love sitting around with a glass bottle of wine, an open laptop, and a brain full of snarky comments awaiting those more fortunate, however, and this year’s Emmy Awards provided the perfect forum for criticism galore. Don’t get me wrong, there were still plenty (not really plenty… a couple) of things to get excited about, which I’ll be sure to mention below, but instead of “Hits” and “Misses” or “Do’s” and “Don’ts,” this Emmy post will be broken down by size.

“Big” – Rings on the finger you flip people the bird with. 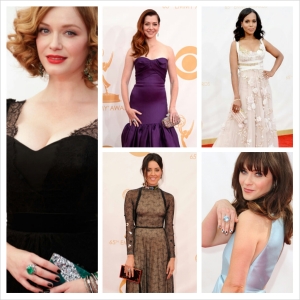 I imagine the area surrounding the Nokia Theatre on Emmy night must be pretty freakin’ crowded: limos everywhere; Hollywood residents trying to get home after a long day at the Scientology center; and undereducated tourists wondering why in the hell their taxi hasn’t moved more than six feet in three-and-a-half hours. It’s this scenario that leads me to believe that someone, at some point on Sunday – be it cab driver, member of the media, or Kardashian (I mean, they ARE everywhere) – had been flipped a big ol’ bling-dripping bird for cutting off an Emmy nominee’s chauffer. Don’t take my word for it – look at the pictures. Just about every huge ring on loan was worn on the middle finger of the right hand. How much would you pay for a group photo of Christina Hendricks, Alyson Hannigan, Kerry Washington, Aubrey Plaza, and Zooey Deschanel flipping off Ryan Seacrest? I’d pay lots. Oh, I’d pay lots. It would have to be an I.O.U. but I’d still pay, eventually. Fred Leighton, Jay Carlile & Company, Neil Lane, and Chanel could seriously benefit from THAT marketing campaign idea. Hey, Ryan, here’s 6.4 million dollars worth of ‘f**k you’ for ya! MAYBE THIS WILL HELP YOU REMEMBER TO ASK ABOUT THE JEWELS NEXT TIME! 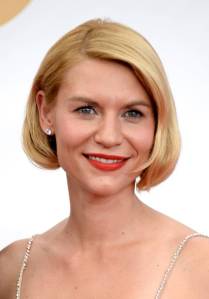 WTF, television people? What is your p-r-o-b-l-e-m? Yeah, okay, the country is having a hard time financially, but so does Great Britain from time to time, yet you don’t see the Queen driving herself around in a Hyundai, do you? We need you people! We need to be reminded that while yes, we’re technically Britain’s biological offspring who sued their parents in order to live on our own, we need our version of royalty to make us forget about the fact that we haven’t paid the cable bill. Tiny stud earrings where chandeliers belong isn’t going to cut it. You may as well show up in your nightclub clothes, like Melissa Leo did. (Boos from the crowd.) What? Oh, stop. Win or not, she looked like she was just shot out of a freshly painted cannon. Fact is, I’m disappointed in all of you stud wearers. Every one of you. Except you, Lena Dunham. I try not to think about you at all when it comes to fashion so frankly I don’t care what you do or wear. Or you, L.L. Cool J (#studinstuds) because LAWDY LAWD you can knock this momma out any day of the week, child. But Cat Deeley, COME ON! You’re one of the most genuinely gorgeous women on television and you pair studs (albeit Forevermark studs, I mean, any other day of the week they’re fab) with a lackluster Armani gown? My heart hurts just thinking about it. Shame on you, Cat Deeley. The Queen must be so disappointed. Your Hyundai awaits, madam… your Hyundai awaits…

As you may have read in a previous post, I’m a big fan of all things Beryl. Both of my kids’ birthstones are Beryl,

so I have a very special place in my heart for emeralds, but this year, I fear the Emmys gave me a case of Emerald Overload. Dresses in emerald. Earrings with emerald. Ridiculously oversized necklace-for-the-occasion made of emerald (looking at you, Maria Menounos). They were BIG and they were “big” and I was so very happy to see some opal finally appear. Here’s the deal: I don’t believe that in the history of red carpets anyone has done emerald as well as Lorraine Schwartz did for Angelina Jolie at the 2009 Oscars (except maybe Bulgari when they donned Julianne Moore in three-million dollar pear-shaped emerald earrings at the 2010 Golden Globes), and so I feel that everyone else – yes, even you, Sofia – pales in comparison in terms of what folks will remember down the road. Don’t be mistaken, Sofia’s going to be remembered, but it will be for the other big things hanging from her body, NOT for her earrings.

Use. An adjective. Other. Than. AMAZING. Try one. There are plenty, Giuliana. It can’t be that your one-million dollar cocktail ring AND Sofia Vergara’s Cover Girl manicure are BOTH amazing. That’s not possible. You know why it’s not possible? Because Louis C.K. said so, and he was nominated for an Emmy, which *may* be an acceptable reason for being called “amazing.”

Stop. For the love of gawd. Saying. “Like.” Before. Every. Sentence. Hey! You kids under twenty-five on the red carpet! STOP YOURSELVES. Pause and think. Get a speech coach. You’re not interviewing for the role of a Kardashian cousin (see a pattern happening here?) so take the usage down a notch.

HashtagACTGENUINE. You’re actors, people. Whether you want to be there or not, you chose this as your profession, so stop shrugging off the Ryans of the world and do your damned interviews, because twenty years from now when you’re making the sequel to “Liberace” you’re going to beg someone with a microphone to ask you who made your lapel pin. HashtagBdashLIST.

It was wonderful this year to see the women of television showing off their beautiful curves and their four-hour-pilates-sessioned arms on the red carpet. While the dresses were on average a bit drab, there clearly were some stand-outs in the sexy-siren category, with grand prize going to – you guessed it – Sofia Vergara. But let’s face it, no Emmy awards would be complete without Christina Hendricks’ rack, Kerry Washington’s lips, Heidi Klum’s shoulders, Lisa Rinna’s implanted cheekbones, and John Hamm’s posterior, so let’s give a BIG round of applause to those things which we most adore!

I hope you enjoyed this Emmy 2013 breakdown. Until the next awards show, this is Adornmentality saying…

SEACREST, OUT. (One can only hope…)