Look, I’m no Richard Blackwell and even Joan Rivers is no Joan Rivers anymore, but after almost 18 years in the jewelry business I think it’s safe to say I can spot an up-and-coming trend when I see one. It’s simple, really, and you don’t have to live in New York, or Los Angeles, or Miami to get the feel for what’ll be in and what’ll be out. Awareness is key, and last night’s Golden Globes put my first-ever predictions list as a jewelry blogger to the test, so let’s see how I did.

Almost, but not quite

I had said that we’d be seeing less emerald and more opal this year, which was really only half right as it pertains to last night’s red carpet glitz. We did see less emerald. However, emerald was still making a go at it, gracing the ears of that GILF, Helen Mirren, who wore some palace-worthy diamond and emerald chandelier earrings by Bulgari (Bvlgari) to compliment her mint-leaf-colored Jenny Packham gown. Also donning emeralds was Mila Kunis in the form of Marina B studs made with Gemfield’s stones from Zambia. Studs were another look I had said (hoped) would be less prevalent on the red carpet this year but alas, we still (sadly) saw a few A-listers –namely Reese Witherspoon, Sandra Bullock, and Julia Roberts—keeping with the minimalist look. Maybe next awards show. One can only hope. Wait, did I just say Reese Witherspoon was an A-lister? Put that one in the “not quite” category, too.

Also saw some Zodiac symbols in the form of Charlotte Olympia “Pandora” clutch purses, but didn’t see any rams, fish, or centaurs gracing the fingers or necks of the red carpet elite. Half-credit where half-credit is due. 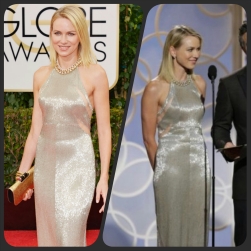 Thrilled to say that the super chunky gold chain – the third prediction from my Year in PREview – showed up early and big in the form of yet another Bulgari piece. Naomi Watts’ otherwise perfect Tom Ford gown seemed to become a backdrop to her stunning gold and diamond neckwear, which looked even more brilliant when she stepped on stage to present an award. Happy to have also hit the nail on the head by calling white pearls as a look that would come back strong this year: “I also predict that pearls – specifically white pearls – will make a strong statement on the red carpet this

Geometric shapes were all over the carpet last night ((cough)) ((#calledit)) ((cough)) and while I personally can’t stand the site or sound of Maria Menounos, she was wearing these beautiful gold earrings by Jennifer Fisher that were shaped like diamonds with a SUPER high depth percentage (that’s for the Gemologists in the room). Also a member of the *Geometry Class* (that’s what I’m calling them. Don’t steal it.) was Mad Men’s Elisabeth Moss, who rocked out some badass Jennifer Myer upside-down Christmas tree earrings. I’m kidding, they weren’t actual trees but they were seriously cool gold triangle-dangles (say that three times fast) and I wanted to give a visual to those who are unable to load the image. EMOSS’ look was edgy and fresh and I’d love to see more of that style pop up on the red carpet this season.

The Man Brooch is now a thing. That’s right. It’s a thing. Meaning it now has a place in cyberspace; that it’s been debated, debunked, and discussed; that it has… for better or for worse… its very own hashtag.

The fourth trend I mentioned in my last post was that of brooches and pins. Quote: “Kate (Middleton) has sported some RAD brooches in her time in the spotlight,

which I largely attribute to why their popularity has gone from “ahead-of-the-curve” to “skyrocket” over the last two years. It’s also why I believe they’ll be one of the biggest fashion must-haves in Two Zero One Four. Even the gentlemen are getting in on the trend…” and **POOF**… God presents me with Bono, when it’s not even my birthday. But not only did The Almighty hand me Bono in what appeared to be a black rose-shaped lapel brooch, he also gave me Atlanta’s version of The Chairman of the Board: Usher. Usher, who also came closest to wearing hues in the Radiant Orchid category (I originally called Adam Lambert to be the one sporting purple) not only gave game to the HASHTAGMANBROOCH, he went a step further by making it a diamond piece. I effing love you, Usher. I love you, and the jewelry industry loves you, and my seven-year-old-son loves you, and mommies everywhere love you. The site of you makes me happier than a Kardashian in a sex video (it’s 2014 y’all… you knew it was only a matter of time). Thank you for making the man-brooch a thing and for adding flash for a red carpet audience that is sometimes all too bored by its leading men.

All-in-all, not too shabby for a first-timer. The show itself was funny and loose and Amy Poehler and Tina Fey were their usual brilliant and gorgeous selves. My fashion favorites were Uma Thurman in Atelier Versace and Chopard diamond earrings; Jessica Chastain in Givenchy and magnificent Bulgari diamonds; and of course, the divine Cate Blanchett also in sustainable, fair-mined Chopard jewelry and a stunning Armani Prive’ gown. A fun, fashion-filled, stiletto-throwing night if I must say so, myself. Until next awards show, I leave you all with this…

ASK ABOUT THE F@*#ING JEWELRY, RYAN.