The great Lewis Carol wrote a line uttered by the King in Alice’s Adventure in Wonderland that read simply this:

“Begin at the beginning… and go on till you come to the end: then stop.”

I started and halted writing my first of what might turn out to be several post-Las Vegas blog entries more than once this week. There was so much going on in my brain; so many stories to elaborately tell, yet I couldn’t figure out a way to get the ball rolling in the tone that these pieces deserved. That is, until my four-year old daughter chose Alice in Wonderland as her bedtime movie… then, I knew what had to be done. I needed only to begin where Lewis Carol had suggested was the best place to do so…

Me: “Are you sure there are no window seats available?”

Delta agent: “No ma’am. The flight has been overbooked. You can fly standby on the next flight to Vegas if you really can’t sit in the middle seat, or if you’d prefer, you could…”

Me: (interruptingly) “No. That’s fine. I’ll just take the middle and hope to Jeebus the person next to me gets caught in traffic.”

Delta agent: (snickers) “Well, it is Atlanta. I say your chances are pretty good.”

A Room with a View – The Strip from THEHotel

I have no urge to make movies. I mean, I know people who make movies and these are some talented folks (side note: go see Dan Schechter’s “Life of Crime” out in theatres on August 29th), but I doubt it’s a skill I could possess. However, if I were ever to consider writing a screenplay, I’m pretty sure I would make it about the various gates in airports around the country temporarily housing those en route to Las Vegas. It would be written as a series of individual short stories with the characters arriving at McCarran roughly all around the same time. There would be Joe – the childless, three-time divorcee heading out to meet his elementary school buddies and their dads for a weekend filled with strippers and scotch. And Alan – the post-middle-age/pre-elderly gentleman carrying multiple containers of freshly-made Georgia cornbread in the hope of selling his wares to a now booming restaurant city. There’d be Karla – a tanned and toned unnaturally tall blond woman who was in my jewelry security class back in January, and there’d be Anita – the suburban “best girlfriend” mom chaperoning her daughter, Chelsea, and Chelsea’s three cohorts who are all headed to Vegas to celebrate their 21st birthdays. But these characters wouldn’t even scratch the surface, because the flights to Vegas contain the most magnificent walks of life. From transvestites to retirees, my Boeing 757 was like a dollar store can of tuna. Meaning, if you cracked that sucker open, sure, you’re bound to get some actual tuna, but you and I both know that there’s a bunch of other stuff in there that shouldn’t be, and neither one of us is going to try to figure out what that stuff is. 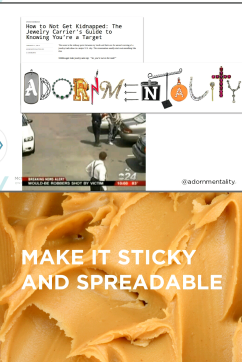 Finding myself sandwiched between Joe the TTD (three-time divorcee) and Alan the CCC (cornbread container carrier) for the duration of the four-and-a-half hour flight, I thought it would be a good idea to try to get some work done. To my surprise I had a message from Andrew Hanelly, SVP Strategy at McMurry/TMG, asking if he could feature Adornmentality in his JCK seminar on content marketing done right in the jewelry industry.

Andrew: “I’d also love a quote on what works and what doesn’t when it comes to jewelry marketing. Have anything provocative?”

Me: “I can give you a quote but in terms of ‘provocative’ I’m still on the plane to Vegas. I’ll need three hours and three martinis.”

Andrew used this very blog in his section on how evoking emotion and telling stories helps build your audience. The slide consisted of my logo and a screen shot of the piece “How to Not Get Kidnapped” because that title alone is what grabbed hold of most readers. To date, it’s my most clicked-on post, as I explained to Andrew via email from the air. To know my blog would be used as an example was a proud moment for me. That, combined with the genuinely nice conversations I had with my seatmates, as well as a landing that would have earned our pilot a gold medal in the Aerial Olympics, gave me the warm and fuzzies about what the next five days was going to be like.

I had finally arrived in Las Vegas. I was ready. I was determined. I was prepared. But mostly…

I was still martini-less. Bartender!

The GUMUCHIAN product wasn’t arriving until 2 p.m., so I specifically took the early flight in order to try to squeeze in an hour or two at the COUTURE show before heading off into the JCK sunset. If you’re an exhibitor you know that we rarely see the sunlight. Jewelry Week is a whirlwind no matter which end of the buying process you’re on, but for me, for the first time, I was also registered as a member of the press. Yup. A MEMBER OF THE PRESS. Me. The thought made me giddy. Don’t believe me? Then check out this photo that Robyn Hawk of The Daily Jewel snapped of me in the press room, clad in badges. I was like a sixteen-year-old who just bought beer with a fake I.D. and got away with it. Look at my face! I don’t exactly know what I thought being in the press room meant other than it was a room I could never get into prior to this trip, but dammit, I was excited to get in there! I could meet up with my friends and mortal enemies fellow jewelry bloggers and we could discuss the current trends or the posterior of that handsome kid from Ritani privately without worrying about some petty little “designer” or “celebrity” hearing us. WE ARE PRESS! WE ARE THE ELITE! WE GET SWAG, B*TCHES! BRING ME MY SWAG!

(That was the sound of my conscience snapping me back to reality via a slap across my overly-smiling and pathetically happy face.)

Okay, (ahem) so, back to my experiences…

The Wynn Casino – heading to COUTURE

I was a Couture show virgin. In all of my years (eighteen!) in this business I had never stepped foot into any other Vegas show besides JCK. But like my earlier post explained, I was over-the-top happy about getting to see what the show was all about and getting to visit with some of my favorite designers. And who do I run into the moment I arrive? None other than the incomparable celebrity style expert, Michael O’Connor, and the incorrigible celebrity aisle expert, Craig Selimotic Danforth. What a perfect way to start this experience. Here stood two incredibly handsome, smiling gentlemen willing to direct me as to where to go, and next to those guys, were my friends Michael and Craig. We kissed. We hugged. We sang Kumbaya. It was weird, and nice, then I realized the clock was ticking, so I left. Off to the Latour/Lafite ballrooms!

Look everybody! It’s WJA president, Andrea Hanson! And there’s adorably pregnant designer Zoë Chicco! Oh, hey Josette from Mark Patterson Jewelry! And OH MY GOD, THAT’S ACTUALLY LYDIA COURTEILLE!! Wait, what? I get to shake your hand and tell you in my worst French imaginable how much your work inspires me and how I love it, or, at least, that’s what I thought I said but maybe I actually told you that my favorite meal is wagons, I don’t really know? I could die. I could just lie down, right here, right on top of Vicente Agor’s cases, right now, and just… freaking… die. WHY DID NO ONE WARN ME OF THE AWESOMENESS OF COUTURE? I blame you, Michelle Orman. You and your “under-the-radar” Couture Musings. You really need to be out there a little more and stop keeping this show such a g-damned secret.

So right after picking up the pieces of my exploded head, I thought it best to rest my feet and quench my thirst with a visit to the Press Lounge, which sadly, I found empty of humans, but filled with other goodies. By “lounge,” of course, I mean “stage”… and by “goodies,” of course, I mean “comfy pillows and power strips.” I will admit it was a little strange to be sitting on a stage in a ballroom while everyone wondered who the heck I was and why I was up there by myself. But, hey, this is Couture, and they do things differently here, and that wedgie didn’t need picking anyway, am I right? If anything it gave some definition to my buttocks, so… up side!

“The Humble Man” in the flesh, Atelier Minyon salon at Couture

Before leaving to head back to Mandalay Bay, I had the privilege of spending some time with Alp Sagnak of Atelier Minyon and meeting his lovely wife. And yes, I did get to wear “The Humble Man” just as I had hoped, while running into a few fellow jewelry bloggers in the process. I was also fortunate enough to see the CJDG crew including Vicente Agor and the talented Malak Atut from Zaiken Jewelry, and, on my way out, even bumped into my minutes-younger friend, Mark Mazzarese. As far as experiences go, it was a short one at Couture, but it was filled to the brim with both sustenance and joy.

If you came to the end of this first segment expecting tons of pictures of fancy product and cool new designs with carat weights and back stories, then I hope your disappointment isn’t too grand. This series is about my stories from the trip. They’ll be about the connections and the events and the people who were a part of my five days in Sin City. But each segment will be told in a way that you will likely not have read before… and on that promise, you can bet. It is Vegas, after all…

Next segment… the first days at JCK!

8 thoughts on “Tales From the Strip: Part 1 – The Beginning”