Voice Recording: “This is your wakeup call for Friday, May 30th, 2014. To receive a call in fifteen minutes, press the….(click).”

Five hours sleep. Could be worse. Oh, G-d, it’s only the first day. It will definitely be worse before this week is over. My apologies, liver. Please just know I never meant to hurt you. Or you, skin. Or even you, feet. Just chalk it up as something we have to do for the greater good. I promise that when we’re in our seventies, sprawled out on the beach somewhere in Sicily, you won’t remember any of this. Probably because I’ll have dementia at that point, but regardless, that’s my promise to you. No need to get into specifics. So, whatya say? Let’s get up and get going, shall we? Let’s show Sin City just how it’s done… 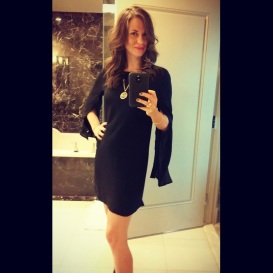 Day 1 was a special day. For one, it was the first day of the JCK show, which meant that it was my first Vegas show with GUMUCHIAN, and we got to introduce to the world the new “B” Collection that I spoke about in my pre-show post about who and what to see. I was stoked as heck about this line, namely because the idea behind it is to do something good; to help the environment. “Jewels with a cause” someone dubbed it to me, recently. I liked the sound of that, and I was ready to play my part.

Clad in a black Carmen Marc Valvo dress with sleeves that I referred to as “bat wings” throughout the day, I left my room an hour before I needed to be at the booth so that I could check out the “Mimosas and Manicures” Platinum Guild event going on at the press lounge (See?? I told you we get to do the cool stuff!). I was greeted by Communique’s Rebecca Moskal who exclaimed as I arrived… “We’ve got our first blogger, everyone!” which of course made me as giddy as a twelve-year-old (circa 1985) getting to meet Robbie Rosa from Menudo. I snapped pictures of the platinum product on display and chatted with my much taller friend, Amanda Gizzi, about how I hate it when she walks into the room.

Me: “I mean, do you really have to be in the same places I am? I’ve got so much game until you walk in. You and Monica Stephenson both p*ss me off. It’s weird not being the tallest woman in the group.” 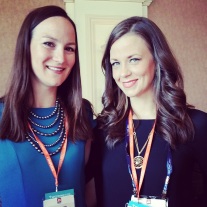 Amanda and me right before the killing

Me: “Thanks for the reminder, Amanda. Here… (taking a sharp, metal nail file from the manicure table) go ahead and shove this right into my heart, will you?”

After dying briefly from multiple stab wounds to the chest and being revived by the paramedics, it was time for me to make my way to the Prestige pavilion, but not without first walking through the Plumb Club to say hello to my colleagues at Honora Pearls.

If you’ve never had a reason to visit the Plumb Club, you’re lucky. No offense, JCK Events, but that’s the most f**ked up layout I’ve ever had the displeasure of experiencing in all of my years of show attendance.  Why are booths 800 and 100 on the same row? Who thought that quadrants with rows travelling at both forty-five and ninety-degree angles, with the occasional north to south and east to west rows thrown in, was a good idea? It’s like if Barney the Dinosaur decided to open his own theme park consisting of one big corn maze and no rides. I needed a show floor map just to find the station that handed out the show floor maps. It was a living, breathing, purple conundrum, and after ten minutes of circling what I found out was the same row three times, I gave up on finding my friends and figured I would just run into those drunk bastards fine gentlemen later that evening at the hotel bar. 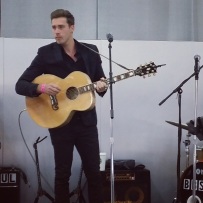 Ray Somebody from “The Voice”

The first day of the show was a great success, and being located near the Starbucks meant that everyone who wanted a legal pick-me-up came into my line of sight. Not only did I get to speak with some of my favorite retailers, but many of my editor/writer/blogger friends also stopped by to say hello. A highlight for me was getting to chat with INDESIGN magazine EIC, Trace Shelton, and being humbled by his compliments on my writing style.

The show came to a close with the Prestige cocktail party topped off with a mini-concert by none other than mega-superstar singer, Ray Boudreaux. (I’m sorry. I’m forty-one and apparently live in a paper bag. WHO?????????) Allegedly, this is the kid who was the runner-up on last season’s reality singing show, The Voice. I have no idea because I don’t watch crap T.V. singing shows. I only watch award-winning television dramas, like American Idol. Side note: YOU WERE ROBBED, JENA (pronounced “Gina”) IRENE! And with that, I was off to celebrate the SECOND special part of the day, which entailed “getting the old gang back together.”

Designer, blogger, and #CatInTheBowl owner, Wendy Brandes, describes our little gal group as such: “The Vegas Gems are wimmin I know through social media, including designers, journalists, bloggers, sales reps, buyers — anyone who has anything to do with jewelry is welcome.” 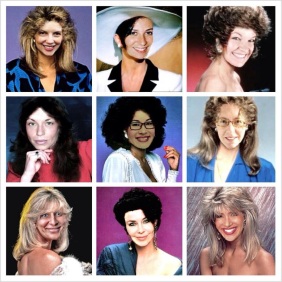 Dynasty Gems – no caption needed other than that

Last year, we had our first ever #VegasGems get together – a term that started as a hashtag but quickly became so much more. Since then, our gathering has sparked spin-offs such as blog posts, YouTube videos, and one now fairly infamous work of Photoshop depicting the Gems as characters on Dynasty (by yours truly, thank you.) The thing about us is that we give one another support, in whatever ways we can, and however often it’s needed. Got a new design? You can guarantee that your Gems are the first to tweet about or include it in a blog. Written a post about your documentary experience in the gem mines of Africa? Consider it spread like wildfire on Facebook. We have realized – whether because of our age, sex, or experience – that we are not alone in this industry. That as women, we need our sisters, and being the Lone Wolf may get you to the top of the mountain swiftly, but once there, it won’t protect you from the pack of coyotes creeping up behind you. We are all different, and all talented, and we all love us some sparkly jewels, stiff drinks, intense conversation, and above all… good laughs. Example:

Me: (taking out my Samsung Galaxy Note phone) “Okay, Katrina and Erika, get together for a picture…”

Katrina Kelly: “Holy hell, what kind of phone is that? That thing is HUGE.” 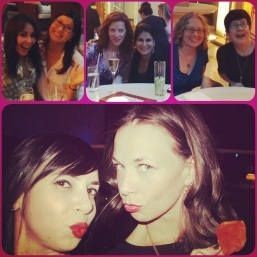 Photo grid of the #VegasGems in various positions. Oh, and chips.

Me: (Looking at Monica Stephenson, who is trying not to laugh because she’s already heard me utter this line once today) Why, thank you. Yes. Yes it is. It’s to compensate for my incredibly tiny vajayjay.

See what I mean? You get a bunch of women together, throw in a margarita or six, and it all comes down to vajayjay talk, no matter what the original subject matter. What’s that, Peggy Jo Donohue? You and Cheryl Kremkow are discussing the security of the TRTL 30×6 jewelry safes? You know, once I considered putting a combination lock on my very own vajayjay.

Okay, for those considering leaving this blog, probably never to return, I promise that I won’t discuss the “V” word any more. Sometimes I get carried away at the fact that I’m my own boss on this publication and take liberties I probably shouldn’t. 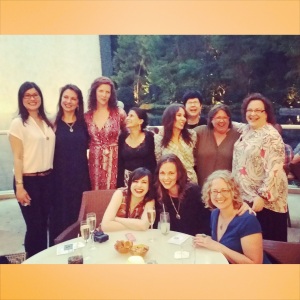 After being serenaded by the world’s largest stalker-frog at Parasol Down, the Gems and I broke off into groups and discussed everything from camera lenses to #leaningin to the magnificence of the craftsmanship of the many pieces we had all feasted our eyes on that day. Shamila Jiwa and Monica were in deep discussion while Wendy, Katrina, and Erika Winters were looking at Wendy’s new Taxi Cab Maneater ring. I, however, was transfixed by the talk being had between the two group mentors – Cheryl and Peggy Jo. I couldn’t pull myself away. To listen to these women who have been, and frankly still are, where I can only aspire to be one day in terms of respect and admiration, discuss where this industry is headed, I was filled with pride. Pride at being a woman. Pride at being a writer. And pride, knowing that I was just as much a part of their life story as they were of mine. I really do love all of these ladies, and want nothing for them but success and happiness.

I was sad that two of our Gems were missing that night – Jessica Cohen, and the birthday girl, Brittany Siminitz, who was at dinner with her JCK family. But as the night lingered on, I excused myself from the group and headed back to Mandalay Bay to try to see Britt before turning in. Luckily, that magical place we all wind up – Eye Candy – didn’t let me down. There I found Brittany and the JCK/TMG crew, including Jen Heebner, Andrew Hanelly, Britt’s husband Jesse, and my FAVORITE person in the world to annoy…. JCK Senior Editor, Rob Bates.

In my mind, Rob Bates hates me. Does he hate me? Probably not. Does he strongly dislike me? I really have no idea, but it’s fun to think that he does because it makes me do outrageous things to try to get on his nerves. First, I have a *Rob Bates dance* that I do, which is similar to a Roger Rabbit combined with a Cabbage Patch, but all the while I’m singing his name super loudly over and over and over, in the most asinine of ways. “Rooooooob BAAAATES. ROB BAAAAAAATES! Rob Bates. Rob Bates. ROBBBBBBBBBBBBBYYYYYYYY BAAAAAAAAATES.” And all he ever does… I SWEAR TO GOD, and I think it’s why I continue to torture this poor man… is look at me briefly with this confused expression before shaking his head and looking in the other direction. I. Freaking. LOVE his reaction. My goal is to get this guy to just break down and laugh at me… JUST ONCE… and until that days comes, he can consider himself Bates-Bait forevermore.

Raymond Hak said to me on Facebook after our return… “You seriously have too much fun in Vegas, Barb. You should be made to pay some sort of ‘Fun Tax’ or something,” and he was absolutely right. I don’t gamble. I didn’t shop. I don’t get super drunk. But what I do do, is laugh. And man, I did a lot of that in Vegas, which you can read more about in parts one and two of this series, and of course, parts four and five, coming soon.

11 thoughts on “Tales From the Strip: Part 3 – The Vegas Gems Ride Again”