Way back on August 9th of last year I published my first full-length blog post right here on Adornmentality. “The Awesomeness of Thirty” was my second published post but the first to disseminate my comedic and sometimes over-the-top style of writing. Once it was live it felt like an accurate way to show the blogosphere that I had arrived and planned on staying. Today, on the one-year anniversary of the day that Adornmentality was launched, I give to you my thirtieth published post.

The City, to me, is as familiar as it is strange. It represents lotteries won as much as it does deaths in the family. Its tunnels are vacuums sucking me into its temptations. Its bridges, outstretched arms letting me know that it will hold me when I need it to. Its high-rises remind me of both its strength and its vulnerability as they glow proudly in the dawn, yet weep silently in the dusk. The City, is my home away from my home away from home. It’s the taller, prettier, more interesting sister of my native Philadelphia, and it has brought me more joy, pain, ecstasy, and heartache than one should ever be allowed to feel in a lifetime.

The City is where I and many others get into trouble. The City, to quote the song “Sea of Love” by The National, is where “Trouble will find me…” and it does, and it has, and it likely will again, but this time the City was nothing more than a platonic friend who asked me out for coffee so that they could talk shit about politics and discuss the latest earring trend being seen on red carpets everywhere. I decided I’d sneak a flask full of bourbon into the coffee shop on 43rd because let’s face it, what’s a little gossip without a little booze, yeah? Yet as I expected, the City brought their own, only theirs was a Macallan 18, in a thermos the size of a fire extinguisher.

I love you, City. I’m so happy to be in you. I don’t want to be anywhere else in the world right now. 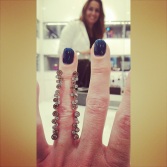 If you haven’t had the privilege of spending a couple of hours with WJA President Andrea Hansen in her LUXEIntelligence showroom on West 45th, you’re missing out on the kind of experience that stays with you long after the buzz from the bottle of Chardonnay that the two of you killed while there has worn off. This is how I spent the first few hours of my Saturday in New York. So many jewels to gawk at/rings to try on/questions to ask/answers to ponder/grams to Insta. She’s a gift to our industry, this woman, like many before her and many beside. And if you’re a designer looking to publicize your brand, I suggest making LUXE your first stop as you consider your investments.

New York Jewelry Market Week is nothing like Vegas. That’s not to say that shenanigans weren’t or aren’t had. New York is the Mecca of the U.S. jewelry industry and every year thousands of buyers flock to the two major summer shows (JA-NY held at the Jacob K. Javits Convention Center, and JCK Luxury Prive held this year at the Waldorf Astoria) in the hopes of getting their holiday orders in before it’s too late (What are you waiting for, people??? I’VE GOT MOUTHS TO FEED!). Also held the same week are some major industry events, including the AGS Circle of Distinction Dinner, and the long awaited and always anticipated, WJA Awards for Excellence Gala.

Last year’s post, “The Awesomeness of Thirty,” largely focused on the Women’s Jewelry Association’s 30th birthday that was celebrated grandly at the Awards for Excellence event. This year’s gala marked the WJA’s 31st year, yet the event was no less spectacular and not without surprise. Gala chair Natalie Humphrey of Forevermark blew the eventually uproarious crowd away with her live (hear that, Lana del Fake? LIVE. As in, ‘not pre-recorded for studio audiences’) piano-accompanied rendition of “Diamonds are a Girl’s Best Friend.” Not to be outdone, Platinum Guild president Huw Daniel led an all-male striptease act (a-la “Magic Mike”) that included guest appearances by Darwin Copeman, Kevin Reilly, and a surprisingly – shall we say, (ahem) gifted – Matthew Tratner.

(I threw that last part in to see if you were paying attention. Clearly no one stripped while at the event. I cannot speak for what Mr. Copeman does in his spare time, however. I’m just sayin’. I’m pretty sure I saw him pay for his drinks in damp one dollar bills.) 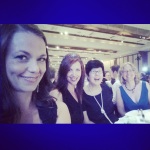 Half of the #VegasGems seated at the GUMUCHIAN table

The 2014 Awards for Excellence winners included Heather Moore, Michelle Graff, Chana Regev, Kim Adams, Cathy Calhoun, Amy Jackson, Jennifer Peck, Desiree Hanson, Rosanna Doherty, and Fran Pennella. The Lifetime Achievement Award, (in case you’ve been living in a swan’s nest and this is the only industry blog you read) was given to the AGS’s Ruth Batson, and the Ben Kaiser Award was given to Jewelers of America President and CEO, Dave Bonaparte. Richline (not to be confused with Richemont or Rich People Who Only Wear Brands By Richemont) received the Corporate Award, just to prove, yet again, that Corporations are indeed people. Wait… what?

As usual, my ladies – the #VegasGems – were representin’ at the event with every one as gorgeous as the next. Also representin’ were my boobs, but that’s for another blog post, entirely. I spent a large part of the evening hootin’ and a hollerin’ from my table for my favorite nominees which eventually enticed Jeff Post to lean over from his table to remind me that I wasn’t at a Flyers game. Sorry err’body. I blame the pinot grigio. 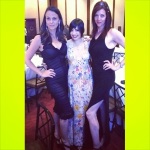 This year’s massive dessert spread and after-party were sponsored by the consumer-facing, uber-popular World Gold Council initiative, LoveGold. (***EDITOR’S NOTE: THIS POST IS NOT SPONSORED BY LOVEGOLD. HOWEVER, MATTHEW TRATNER DID GIVE ME TEN BUCKS TO ALLUDE TO HIS ANATOMIC GIFTEDNESS. I REPEAT: LOVEGOLD HAS NOT SPONSORED THIS POST IN ANY WAY. FYI THAT TEN DOLLAR BILL WAS ALSO SORT OF DAMP***) At this time of night there’d been more champagne passed around than a Kardashian in a frat house so everybody was having themselves a fabulously lovegoldelicious time. One particularly fun part of this event the last couple of years has been Rio Tinto’s “Diamonds With a Story” photo booth which by this late hour had a line longer than the Starbucks inside Javits at 8:50 a.m.

The WJA A4E gala is my favorite jewelry industry event of the year for several reasons. Mainly, I get to spend time with women I adore and network among some of the biggest names in the biz. I’ve never felt as if I wasn’t among peers at this event… I’d even go so far as to say that I feel even more as if I am among family. Ever have someone tell you something positive that was so unexpected you actually felt a shift in your life take place where you stood? That happened to me at A4E. Someone pulled me aside and said “You’re like the Dorothy Parker of jewelry. Keep going. Make your mark.” And I haven’t been able to will the moment out of my skull. Nor can I stop laughing at Mrs. Parker’s famous quote when asked to use “horticulture” in a sentence…

“You can lead a horticulture, but you can’t make her think.”

Man, I would have loved to have hung out with her. Maybe because I see similarities between us. Maybe, if Dorothy Parker lived today, and wrote a blog, and was who she was back then, now, she’d have celebrated her one-year anniversary in the way that I suggested I wanted to celebrate mine… by letting everyone who has ever read it flip her a big’ ole middle finger. So many innuendos. So many hidden meanings. And so much of her personality in this one, simple, inappropriate gesture.

You gals (and guys)… y’all are something else, I’ll tell you that. Thanks for taking part in my little #birdsforwords experiment and for letting me enter your lives over these last twelve months. Let’s keep this thing going, yeah? And lastly, let’s take a look at the #birdsforwords that are now and forever part of the internets.

Smooches. On to the next year! 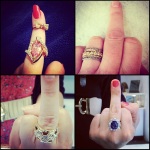 My own bird, in three different poses 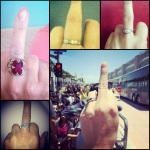 Birds from the folks back home 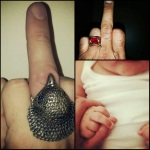 Birds by WJA members taller than I 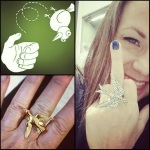 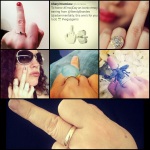 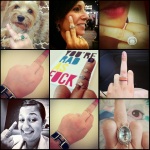