Cindy Edelstein was hard on me.

She didn’t coddle me. She never blew smoke up my ass. And she was quick to tell me when I said something or did something that she felt was wrong.

For a while I struggled with knowing what she thought of me or about me. She kept me guessing, which kept me on my toes, but as I reflect on our relationship, I think that was her plan all along.

Cindy Edelstein was exactly what I needed at a time when I had no idea what it was I needed.

And today, her family, our industry, and I mourn her passing.

I had seen her face and read her name in a thousand articles I’d viewed over the years I’d been in the business, so in the summer of 2013 when she walked up to the SJTA trade show booth I’d been working in, I knew exactly who she was.

She was there, at the Atlanta Jewelry Show, to teach a course to those in attendance. I had just started writing Adornmentality and to my surprise, Cindy already knew of me. Her daughter, Remy, and husband, Frank, accompanied her on her road trip, and so I gave Remy some pointers on the cool neighborhoods to visit around Atlanta, as well as the areas she’d be able to find vegetarian restaurants. I remember looking at Remy – a not-so-shy high schooler with a unique sense of style and vibrant character – and thinking about my own daughter. My mom wasn’t a cool mom. She didn’t let me do funky things with my hair and hated that I was into The Cure and The Smiths, but Cindy seemed completely comfortable with Remy’s path. She seemed to not only be content with the daughter she’d raised, but encouraging of her individuality. That… that earned my respect well before I ever knew all she had done for the industry and for countless jewelry designers in it. That holds my respect and will continue to for a long, long time to come.

From that point forward, Cindy and I were part of one another’s lives. We saw each other at trade shows, shared drinks at Women’s Jewelry Association events, and co-tweeted many an awards gala red carpet, but I still couldn’t figure “us” out. Where did I stand in Cindy’s mind? Did she think I was another false industry prophet? Another “come out of nowhere” superstar whose flame would die out long before ever reaching orbit? I couldn’t get a read on her, or what she felt about what I was doing. But the more I thought about it, the harder I tried to get her attention through how hard I was working and what I was saying. 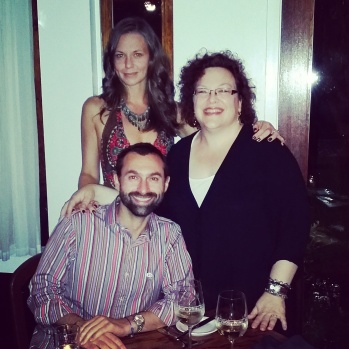 I’ll never forget the day she emailed me to ask me about spearheading an Atlanta chapter for the WJA. We went back and forth via email and spoke on the telephone several times regarding who we knew and what could be done. When I told her that I was more than happy to help out in any way I could, but that with the amount of travel I did for my job, plus the blog, plus trying to be a mom to a three-year-old and a seven-year-old child, I wasn’t able to take on the role of President, she tried to convince me otherwise. “If anybody can make this happen, you can. I know you can.” It was the first time I felt like she believed in me, which made it all the more heartbreaking to have to still tell her I just couldn’t. I thought I had killed my only shot of earning her respect, but that’s not how she worked, and wasn’t who she was. She was hard but still very soft; guarded, but just as open. She had her passions and her muses but I promise you, she watched us all. That’s probably one of the best ways I could describe Cindy Edelstein: she was a watcher. She watched, and she listened, and she knew more than any eyes, ears, or brain in this biz. That alone set her apart. That alone will make her irreplaceable.

Over the years that followed our first encounter, Cindy had asked me to help judge a couple of design competitions, and involved me in various WJA and industry discussions and gatherings, and that gave me the sense that she was cool with what I was doing. I think Cindy could read that I wasn’t the type of person who needed to be coddled. There are plenty of those types out there, but she sensed that I required mentors with balls (figurative balls, not literal balls) and so she did her fair share of reprimanding and head-shaking as it pertained to things I did. But see, I need that in my life. I would vomit if I was constantly told how awesome I was and rarely heard how I could improve. I don’t want that in a mentor nor would I be that in a mentor. NO ONE is that awesome. We should all be improving, every damned day. Cindy not only understood that fact, she lived it. She lived it, and taught it, and has left it with us to nurture in her memory.

To the hundreds if not thousands of designers whose lives and livelihoods were enhanced and improved because of their association with the late Cindy Edelstein: I offer you my sincerest condolences and can only suggest to you that you do what Cindy would have done. Think, “WWCD”… What Would Cindy Do?

To Cindy’s jewelry family (her WJA sisters [and brothers], fellow writers, trade show associates, and those she mentored): we are feeling your loss with you. She was the kin who always showed up to the reunion with a couple of bottles of tequila, and we’re all greatly missing her presence, already.

Finally, to Frank, and to Remy: No one knows the pain you are feeling right now. No one feels the heartbreak you do. But, if there is anyone who might come close to knowing, be comforted in the fact that it is not just one person, but an entire world. The jewelry world loved, adored, emulated, admired, respected, valued, and needed your Cindy. She was yours. She was ours. And now, she is her God’s.

Rest in peace, Cindy. Watch over us all. We’re counting on you.

20 thoughts on “The Day Our Industry Wept: Why There Will Never Be Another “Jewelry Biz Guru””