We all have our stories for this day, don’t we? We have our own distinct memories of where we were, what we were doing, and the people we were doing it with. Our parents and their older friends could tell you it was the same when President Kennedy was killed. Some of us could tell you it was the same when the Challenger Space Shuttle exploded in front of millions of television viewers, while the world looked on. But this… this was so much different. This one event changed humans in the long term. Yet here we are, thirteen-years later, recalling our pain as if it were yesterday. And we still have pain. We didn’t need to lose someone in the towers to have pain, either. On this day, thirteen years ago, we were all Catherine Gorayeb’s daughter. We were all Suria Clarke’s dad. And we were all Todd Beamer’s wife. We cried on their shoulders, held their hands, wiped their tears, and prayed to our God. We stood united with them and we stand united today, even if for just today, as a nation of consolers.

This is one jewelry person’s memory of the events of September 11th. This is my memory, and my story, and how my life was changed because of it.

Co-worker Don (picking up wall phone): “A&K Manufacturers. Oh, hey hon. (silence for about thirty seconds)… You’re shitting me. Oh my God. Okay. Call me back if they say anything else.”

Co-worker Don: “That was my wife. She said apparently a plane crashed into one of the WTC towers. She said it’s all over the news. The whole top is on fire.”

Co-worker Don: “She said a plane. Probably a small private plane or something. I’m sure accidental.”

Me: “I can believe that. You know, the same thing happened in the forties to the Empire State building. A B-25 bomber, I think. Guy accidentally flew it into the building because he couldn’t see. I mean, you’d think now the air traffic control would be better, though… right?”

Co-worker Don: “Why are you as young as you are and you’d know something like that?”

Co-worker Don (picking up phone again): “A&K. (silence for ten seconds) you’re fucking kidding me! OH MY GOD. YOU’RE KIDDING ME! (Now pulling the phone away from his ear to address my boss and me)… She said she just watched a big jet fly into the second tower. Just now. ON TELEVISION!”

Me: (speechless, frozen, and completely in shock): “That’s no accident. We’re being attacked.”

Sansom Street is the main strip in Philadelphia’s jewelry district and I worked in a place dead smack in the center of it. But Sansom Street was also in the heart of the city’s historical district. Independence Hall was a block east. The Liberty Bell was only feet away. The birthplace of our nation was in my peripheral vision and my mind started racing as to what would be attacked next.

Not even an hour later this is what else we knew: The Pentagon had been crashed into and the South Tower (the second of the two to be hit) had completely imploded, killing all inside.

“This… this is war.” I thought to myself as I tried to continue working while listening to the radio for any updates we honestly were fearful of getting. We didn’t have smart phones yet. And cell signals were so overloaded that radio, of all things, was the only way we could keep up to date. My then husband (and now ex-husband) came crashing through the doors of our jewelry shop shortly after ten, sweaty and covered in paint, with a familiar angry look on his face. “Why are you still here? Why are they keeping you here? You’re in center city and there are still missing planes. I’m taking you home right now.”

But I wasn’t ready to go home yet. I knew that everyone was leaving Center City. Everybody, even my mother who worked at a bakery just ten blocks from where I was had packed up their stuff once the second tower had been hit. But my bosses were older Armenian men and they weren’t afraid of Philly being a target, and so they kept the shop open, and there is where I stayed until finally, around 2:00, they realized no one was left on the street to come in.

I didn’t know where to go. I was afraid of going home and sitting in front of my television and watching what I had only been hearing up to that point. Death affects me. Brutal deaths, however, well, they haunt me. I’ve never been a person who can watch a video of someone dying. I even turn away at the exact point on the Zapruder film when the bullet reaches Kennedy’s head. I feel like I’m violating the rights of the now deceased to watch on television how they died. It seems too personal to be broadcast for audiences of people. And I wasn’t quite ready to see the devastation for myself. Not right then. Not just yet.

I got into my car, and started to drive. I first drove around a desolate Philadelphia. I drove to the house I grew up in from age 10 until 18. I drove past my beloved high school, and my favorite cheesesteak shop, and my best friend’s mom’s house near where I would play stick ball with my brothers. I drove to the usually bustling Italian Market and listened to the silence that only a crisp, late-summer’s day could bring. I drove to Penn’s Landing on the Delaware River, parked, and looked across to the state of New Jersey, wondering if, like I, they were feeling a pain and confusion beyond their wildest imagination. And then, I drove to the church I was married in, and I walked through the open doors, and I sat in an empty pew.

That, is when I cried.

Catholicism comes with a guilt that only most Jewish people can relate to. I sat in church, guilty of not having stepped foot into it since the day I was married almost two-years prior. I felt the guilt that I was there to ask for something; to request something of a higher power that I had not paid attention to other than to call his name is angry situations. I felt the guilt, but it didn’t stop me. I fell to my knees and let loose a wail. I cried for every child who would never see their parent again. I begged the Lord to make it stop – to cease whatever attack was potentially about to happen. I cried hard, and plenty, and I pleaded until I had nothing else left. And that’s when I felt I was ready to go home. 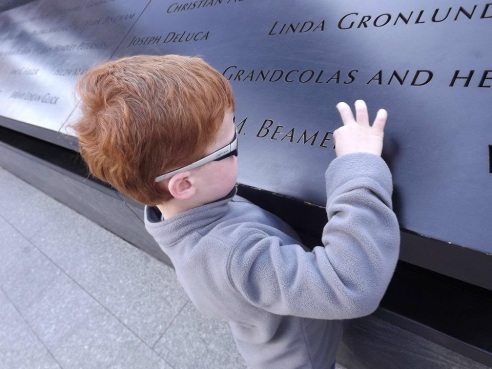 Seeing the jets crash into each tower replayed over and over and over on my television was surreal. I couldn’t get a hold of any of my New York friends and had no idea if they were safe or not. But the thing that got to me – the thing that, without hyperbole, CHANGED MY LIFE – was the coverage of the people who were searching for their loved ones. It was, by all accounts, the papers. Papers and flyers with “missing” at the top. Families crying, holding paper signs in the September night with brothers’ and sisters’ faces emblazoned across them. “Please. Please call this number if you’ve seen my son, Michael. Michael, please call us. We can’t get hold of you and we’re worried. Please, son. We love you.” I can still hear them in my head. I heard them over and over on the night of September 11th as I sat alone in a bath tub trying to wash away the day’s memories.

I sat, and I thought, and I contemplated, and I cried, and I hurt, and I wondered, and I eventually decided…

I wanted a divorce.

Maybe not that day, as that would have been a cold, heartless thing to bring up after all of the traumatic events, but I knew, right then, that I wasn’t going to live a life that I didn’t want to live any more. I wanted to travel, and my ex-husband didn’t. I wanted to wait to have kids and he wanted them now. I wanted to live my life and make my own memories and he was not along for my ride. And so in that bath I decided to change my outcome. I wasn’t going to let my life slip away in some cold, soulless shop in the only city I had ever lived in. I was going to start over. I was going to travel, and eat fine food and see fine art, and make fine, fine love without the pressure of having children when I wasn’t ready to have them. If there was a silver lining to 9/11 for me it was my realization that life can be taken away at any given moment, which allowed me to take my life back and create more valuable moments to leave behind should I die. I didn’t want to die never having seen the Mona Lisa, or Michelangelo’s David. I refused to be buried without having sipped French wine in France or Belgian beer in Belgium. And so I followed through on my decision, and I’m happy to say that thirteen years later, it was the right one.

I will never forget the events surrounding September 11, 2001. I will never forget my first flight afterward, or my first trip back to Ground Zero three months later. I will always remember the look on my son’s face when I took him to the memorial two years ago as he touched his tiny fingers to fading letters in Todd Beamer’s name. I am, like you, forever changed as a person. But I am, also like you, forever proud of being American.

May the souls of those lost be at peace and may the hearts of those left behind break ever-so-slightly less today. We all remember 9/11.