What night in Vegas am I on? Friday? Friday. Yeah, I think Friday.

For the last three years, a group of women with some connection to the written word has gathered in Vegas for what we call our annual #VegasGems get together. Our organizer, from moment one, has always been designer and blogger, Shamila Jiwa, and this year was no exception. Shamila came up with the idea that instead of starving ourselves in front of an animated, oversized reptile like we’d done the two years prior, we should instead sit down and do this thing called “aet.” No wait, “e-e-t” I think it’s spelled. Wait, maybe it’s “e-a-t.” Yeah, EAT. That looks right. It’s a foreign concept to most of us during Jewelry Week so we all agreed to try it out both out of curiosity and in the spirit of adventure seeking. And boy, oh boy, what a treat!

Little by little we arrived at our destination, skipping this year’s COUTURE awards in order to keep the tradition going. Shamila had made reservations at JALEO at the Cosmopolitan and assured us we’d have the best seat in the house.

I could continue this story by doing a roll call of names of those who are part of our Vegas Gems group, but this year, after the years of having shared many experiences with these women individually, I’m going to give you a breakdown of who they are, as well as who they are to me, starting at the top, with my mentor-in-chief.

Peggy Jo Donohue – Yes, her résumé in the jewelry industry and in the writing world is long and impressive, but it’s who she is when she’s not broken down on paper that’s special to each of us in attendance. There is no greater cheerleader of your life than Peggy Jo Donohue, but there’s also no better person to sit your ass down and make you take a long, deep breath. Many a ledge has been avoided in my life because of her, and with a new gig on the horizon, it was fascinating to be seated alongside PJD for a large part of the night. Cheers, my friend!

Wendy Brandes – Writer turned designer (yet still a writer) turned duckface maker, Wendy Brandes, adds a unique layer of fabulousness to our group gatherings. Always dressed in something remarkable, up to and including her beautiful jewels, Wendy’s stories of rap concerts, famous people, kinky couples, and Paul McCartney have us transfixed in amazement and green with envy. When she gets going, it’s as if someone mentioned “bomb” on an airplane, as in, no one makes a sound, clenching their butt cheeks, waiting for the bass to drop. I adore you, WB. May we never not duckface together ever.

Brittany Siminitz – If Paul Rudd’s ANT MAN suit was real, and I could find it, steal it, and make this JCK Marketplace Manager wear that shit, I would. I would make her put it on and shrink herself so that she could climb into my pocket or my wallet or my lipstick holder and be with me all day long, every day. Then I’d make her life size again whenever I needed my Brittany fix. It’s a dream, but what is life without dreams, right? Brittany is truly an underrated yet extremely gifted writer, but beyond that she’s genuine, and positive, and a joy to be around. PLUS, it was her birthday, so, double awesomeness.

Shamila Jiwa – OHHHHHHHHHH, how I LOOOOOOVE me some Shamila Jiwa! Shamila is so tiny that she doesn’t need Paul Rudd’s Ant Man suit to slip into my pocket, but she did claim that it was a little tight in there, prompting me to go paleo ever since. Shamila is a talented jewelry designer, wonderful writer, hilarious storyteller, and all around awesome human being. I also recently got to spend some time with her, one-on-one, during her summer trip to Atlanta, which is hard to do in Vegas even when you’re out on VG night. Shamila, thanks so much for eternally being the organizer of this. Love you to bits!

Cheryl Kremkow – I’ve always been in awe of Cheryl Kremkow’s ability to spot a pair of earrings or a necklace from a mile away and know who the designer was immediately. Ever follow her live tweets at red carpet events? You should. It’s mesmerizing. Cheryl is inspiring and even more importantly, she’s greatly experienced in the written jewelry word and so when she speaks, I listen, and when she writes, I read. She’s a blessing to every jewelry blogger who exists right now, and her support of me and what I do is so very much appreciated. Thank you, CK. Muah muah muah.

Erika Winters – This one, oh I could just smoosh her face, it’s so damn pretty. Erika has genuinely found her calling as a jewelry designer and we #Gems could not be prouder of her. Her gorgeous engagement ring and wedding band lines and the even more beautiful images of each that she takes herself have a social media following all on their own. She still writes on her blog which can be found on her website and still manages to tackle other genres in the creative world, daily. To me, however, she’s simply my good friend who I’d be happy for regardless of what she was doing. And I’m very happy, Erika. Extremely.

Monica Stephenson – The recent WJA award winner for Excellence in Editorial Media should probably get her own table next year so that the multitude of fans who will want her autograph will have a place to sit. It’s okay. We know what’s up. We’ll just yell the jokes across the room to her and have the champagne brought over on the back of That Kid From Ritani. She’ll still have fun. We promise. All kidding aside, I am so very proud of this woman who I love with the wholeness of my heart and I’m thrilled I got to spend so much time with her this year on a week that is usually sporadic and batshit crazy. I bow down, OH QUEEN! May you reign in this industry for years and years to come!

So, now that you know a bit more about each Vegas Gem (other than me, since, my life is obviously an open book) I will go ahead and get into the night a little, cool? Cool. 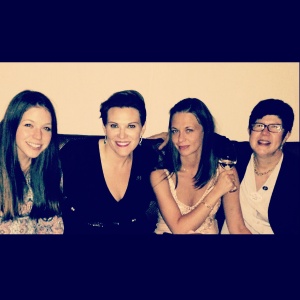 We were at dinner FOR-EV-ER. I mean it, I’m pretty sure we were into our third or maybe fourth hour and sixth bottle of wine by the time Jen Heebner and Tanya Dukes arrived (which, by-the-way, brought the *awesome writer* vibe to “danger zone” levels).

I’m thirsty all of a sudden.

OH, I do recall that I finally got to spend some real time with Jessica Neiwert, however. And I had no idea that Charlie Herner of The Rephinery was her boyfriend, so, total bonus! This a JEWELRY POWER COUPLE, yo! Seriously, keep these two names on your radar and watch them become something magical in this world. I’m betting my next three paychecks on that happening, that’s how confident I am that it will. (Shoutout to Erika’s husband Peter, too!)

As the night was winding down (to Jennifer Dawes, we’re so sorry we missed your gathering!) we realized that several of us had been invited to the OMI GEMS birthday party at The Wynn. We gathered our things and headed through the Cosmo toward the exit, with our fearless long-legged leader clearing a path for the rest of us to follow.

I loathe the Cosmopolitan. It’s like amateur night in that place. Everything one can hate about Vegas is usually walking stumbling drunkenly through the corridors of that godforsaken casino. As our large group tried our best to form a double-file line toward the exit, a cumulus-cloud-sized gathering of gentlemen idiots holding beer bottles and wearing baseball caps headed in our direction. One particularly beefy guy, not paying attention as he was oogling the breasts that were headed up the escalator, slammed full force into my left shoulder, knocking me off balance, as I exclaimed, “OW! Are you serious, dude?”

His beer muscles kicked in, of course, because knocking a woman over is *totally* when they should…

But before the twenty-two-year-old Philly girl living inside of me was able to cock her fist back and land it on his disgusting face, two hands grabbed by shoulders, moved me out of the way, and yelled “Yeah, we’re serious too, asshole!” To which he replied by walking away.

Look, there’s only one other person I know who’s crazy enough to welcome confrontation, but I’m not going to say who that woman is. I’ll only state that her name may or may not rhyme with Shmeggy Flo Clonoughugh, but I can’t say for certain.

After seeing that the cab line was as long as the guy who knocked me down’s monthly phone sex charges, Monica disappeared for a moment only to return with a big, black… limo. (Gotcha!) Half of us piled in (and on one another) and we headed toward to Wynn hoping we could arrive at the Omi party in time to celebrate with even more awesome jewelry industry people.

The event was nearly over when we walked in, but we were still able to chill out with Natalie, Niveet, Mando, and many other folks who had been invited to one of the week’s best parties. It was a great way to end our annual group dinner and before long, I called it a night and headed up to my room.

Thanks, my crew, for such a memorable evening. And we really missed you Jessica and Katrina! I look forward to this every year and hope it never stops.

Next up, the last leg of the journey.