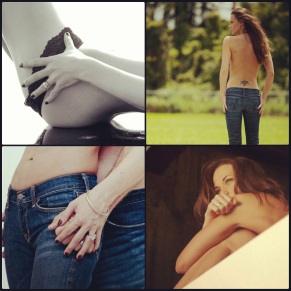 Back when I was about to turn forty, I wrote a blog, quite different from this one. It was a countdown to a pinnacle year in my life and each story was presented firstly by how many days I had left until it arrived. I also had a bucket list of sorts, which included some rebellious things I had never done before but wanted to accomplish because, f*ck it, why not? One of the things on my list was to have professional photos taken of myself in the nude. I had a confidence now at forty that didn’t exist even ten years prior. My body – with all of its scars, battle wounds, tattoos, and two-time pregnancy reminders – was still unscathed by reconstructive surgery, liposuction, or Botox, and I wanted to document what it felt like to be naked in this form, at this point in my life, and at my age. I was empowered – not by any man or the almighty dollar – and felt that the time was right to see this wish through.

When I first had the idea, I spoke to my husband at length about it. He didn’t want me to use just any photographer because, let’s face it, I’m still the mother of his children and the internet is a dangerous thing. Thankfully, he is longtime friends with a badass rock photographer in Hollywood. Sean Murphy has shot everyone from the Beastie Boys to Green Day to Kid Rock, and his resume includes some of the most well-known magazines in the music and surf world. I had to wait for a time when Sean would be on the East Coast to do the shoot, so on a Saturday afternoon in July of 2012, we rented a space on the Westside of town; off went the clothes and out went the inhibitions. But there was one thing I remember making clear to Sean during the process… no matter how naked I got, I wouldn’t be taking off my jewelry. It was part of who I was, and whether it was a shot of my husband and me together with my wedding rings in focus, or the topless pictures in the middle of a field with my feather necklace blowing in the wind, my jewelry was prevalent, and my body – sometimes – became a backdrop to it.

The process and the PG-version of the shoot was written about in a follow-up post, and to this day, I’ve not regretted my decision. I felt alive then, yet not just in a sexual way. I felt free of consequence, even as cars whizzed by and beeped their horns. In my mind, I was living my very own version of burning my bra in the 60’s. It was liberating. It was far from conservative. It rocked. And my jewelry was a very special part of it. 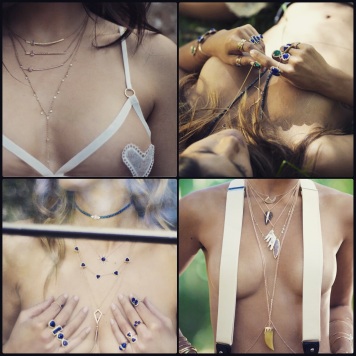 Jewelry by Jacquie Aiche. Images from @jacquieaiche in Instagram.

When I see the tweets of jewelry designer Jacquie Aiche, I’m often brought back to the experience of that day, which sure as shit makes me smile a huge smile. Aiche’s Instagram feed is also filled with gorgeous bodies draped in precious gems in the form of earrings, rings, necklaces, and body chains, yet they’re tastefully taken pictures clearly geared toward women. One of Aiche’s biggest fans is ultimate bad girl, Rihanna, and I guarantee you RiRi is buying those jewels for herself.

While some feminists might cringe at the idea of naked women in social media, I take what Aiche is doing as a sign of new feminism through women showing their bodies in the way they choose to. For years women weren’t *supposed* to talk about what they desired, sexually. They weren’t *supposed* to use swear words, hold high-ranking positions, or wear pants. Today’s women are saying, “Yeah, well, guess what? We don’t want to wear pants now. You know why? Because we don’t want to wear anything. Put that in your pipe and smoke it, Montana.” Yet Aiche isn’t the only designer using the female form to woo women buyers. 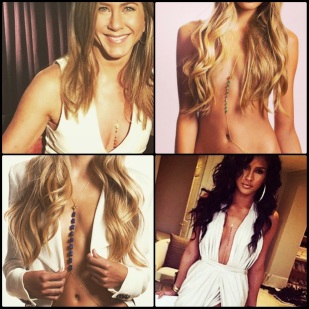 Body chains by Amrit Jewelry. Images from @amritjewelry on Instagram

Jennifer Aniston was caught twice (to the dismay of those who believe you can’t do something twice if you’re famous unless it’s get divorced, or arrested for cocaine), wearing the same black diamond body chain by Amrit Jewelry (designed by Sat Hari) on the red carpet, yet the red carpet isn’t only where she wears it. Aniston – now forty-six years old – also wore it unapologetically in an interview on Access Hollywood. And while early in her career she shied away from showing her skin, these days it seems she’s caught a bit of the “f*ck it” bug, too, allowing these beautiful body chains to compliment her newly outed braless breasts. Sat Hari’s designs are popular with the starlet set, but that doesn’t mean they’re not for gals like you and me. 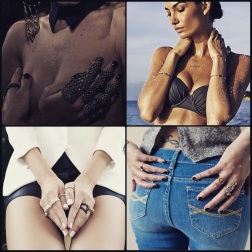 Also embracing the naked female form is the always interesting Loree Rodkin as well as the subtly sexy Zoe Chicco. Rodkin’s creations are often in a class by themselves and her frequent bird flips on Instagram prove that she doesn’t give a shit whether you think she’s a feminist or not. Zoe Chicco’s designs, however, are less about being worn while completely in the buff and more about never wanting to remove them because they’ve become part of your physique. 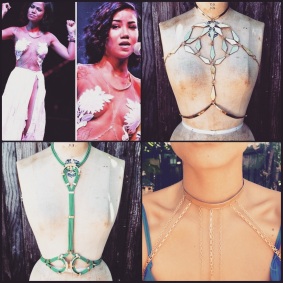 Designs by Maggi Simpkins. Images from @maggisimpkins on Instagram.

Now, I don’t want you to think that it’s just the middle-agers embracing body jewelry as some sort of way to prove we’re still here; the twenty-somethings are at it as well. I’m not referencing the kids doing it to feel popular, either. I mean the clearly talented and rightfully confident young women who are both designing and buying jewelry for their bodies. Women like my gorgeous friend Maggi Simpkins, who currently makes brass and gold body armor and sells it under the brand M By Maggnolia. Maggi started designing jewelry back in 2008 but it’s her body chains and body armor that have caught the eye of Grammy nominated stars like Jhené Aiko. And it isn’t just designers showing us what they’re made of either. Don’t believe me? Then follow the feeds of bloggers Gem-a-Porter and Gem Gossip to see just how happy they are with not only their bodies, but how they think jewelry feels on those bodies. Want one more example? Broken English Jewelry. But don’t take my word for it. Go visit them on Instagram.

Fashion jewelry and designer jewelry are in a different league than say, bridal. Designers – female designers, especially – are at an advantage more now than ever as it pertains to how women feel about themselves and their needs. Showing your female customer that it’s okay to feel sexy in the jewelry they select for themselves is a new norm. No matter the size, stature, or skill set, every woman can put on a necklace, or a body chain that she purchased for herself, and feel a bit like Joan of Arc. We can dress ourselves in an armor of our jewels and conquer the planet one slaughtered stereotype at a time.

The women of this world are taking their bodies back. They are adorning them in gold as if to make a statement not unlike a garbage can on an Atlantic City boardwalk during a Miss America pageant in the 1960’s. They are all around you, and they are saying the following:

“Look at us before you, not naked, but rather cloaked in creativity, determination, sensuality, and spontaneity. Our bodies are the canvas on which our talented voices will be painted upon. It is, however, our brush to hold and our paint to stroke. You cannot rush the process. You must wait your turn to see our masterpiece.”

One thought on “A Diamond in the Buff: How the Naked Body Became the Ideal Canvas for Feminine Jewels”